A CONVERSATION WITH A FRIEND ~ Precious C Philip 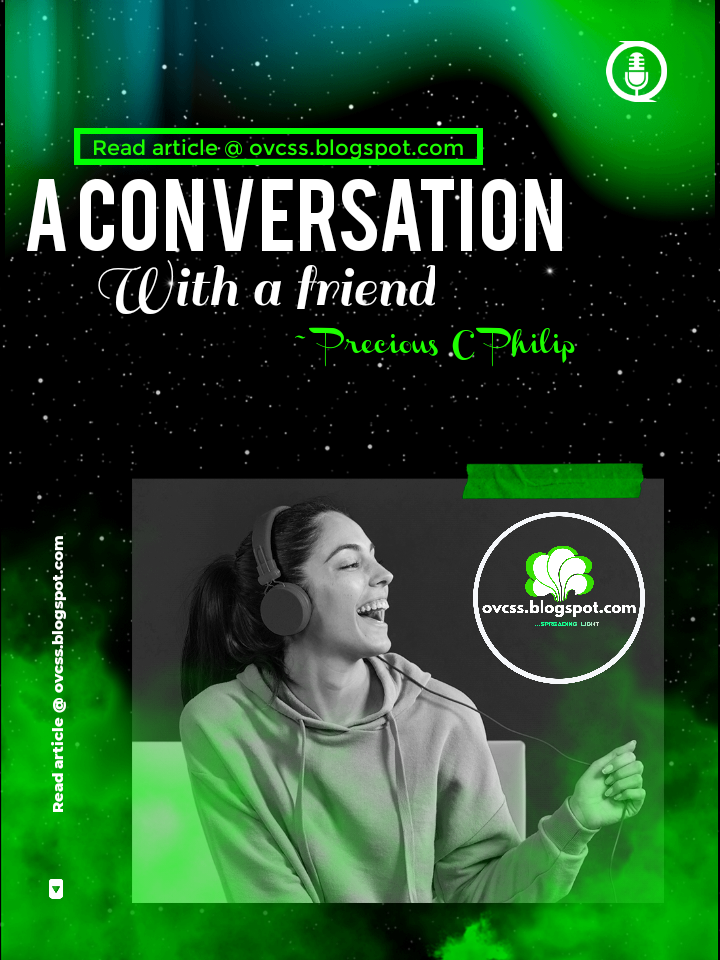 Should we as Christians accept or listen to songs just because their content is morally good without first considering who is singing the song? If Beyonce or Lil Wayne for instance should sing a gospel song, should we embrace the song simply because it's a Christian song? Read the rest of the article to find out the appropriate answer to this thoughtful question.

Sometime ago, a Christian friend asked me whether I listen to Lucky Dube songs because according to him, Lucky Dube doesn't say bad or corruptible things in his songs. I asked him, "If a popular witch doctor in your village should sing a song encouraging people to love one another, give to one another, live right, do good to each other, live in peace... would you buy the song or listen to it and encourage other Christians to buy it or listen to it?" He laughed and said "Funny, this is not witch doctor na". I pressed further for him to answer the question, then he said "No". I then asked him why, but he never answered, saying he already knows it is wrong for him to listen to Lucky Dube's songs. I believe the Holy Spirit convicted him. The only thing he said was that Lucky Dube smokes, and that's the reason he thinks it's not good to listen to his song. I said okay. I had wanted to share a deep truth with him the Holy Spirit revealed to me as I sought to answer his question wisely, but with the response he gave showing he doesn't want me to explain detailedly, I shared just a few things with him. The rest of the things I had wanted to share with him is included in this article. I had to write the article to share it with a lot of Christians who're unaware of it.

This was my reply to him, "Lucky dube was a rastafarian. And rastafarian is actually a religion where the members "Rastafarians" regard Haile Selassie I as God . Today, Haile Selassie is worshipped as God incarnate among followers of the Rastafari movement. So rastafarians do not actually serve the Almighty God which most people believe they're serving because they say they're serving "Jah" which they interpret as God. It is sheer deceit. They see that man, Haile Selassie I as their actual god. They worship him and say they're serving God Almighty. Just like Muslims revere and idolize muhammad and say they're serving the Almighty God which they call 'Allah'. Both religions are mere deceit. Neither of them is serving the Almighty God. Keeping dreadlocks and smoking weed is part of what the religion of rastafari encourages and promotes because they believe they get inspiration from smoking weed. So you see the actual source of his inspiration - I mean the song he sings.

Therefore, we don't just accept songs and listen to them because it says nice or good things. I believe you know that Beyonce and Jay Z sometimes sing nice songs that appear as though they're encouraging people to love one another, but do you listen to those songs? No. Flavour, a Nigerian artist and even 2 Face sometimes also sings "morally edifying" songs, even songs with "God" in it, but do you buy them? No. Why? You don't accept the person singing the song. So why should you accept the songs of Lucky dube or Bob Marley just because they're "nice or good" songs?

Moreover, did you notice that when Cain offered his offerings to God, it says in Genesis 4:5 " but he did not accept Cain and his gift. This made Cain very angry, and he looked dejected.." So God first considered the person bringing the gift before looking at the gift. He rejected Cain first and then his offering. This is what we should do too. First consider the person singing the song before looking at their song. If you accept them, then you should accept their song. But if you don't accept them because God doesn't accept them, you should not accept their song."

This was my reply to him.

However, this is the deep truth I had wanted to share with him which the Holy Spirit revealed to me: the devil does not take glory alone from songs that are immoral, he also takes glory from songs that seem nice, morally right and even appear gospel when the inspiration is not from God and when the singer is not serving God. Take for instance a "man of God" who uses power from the devil to heal the sick and grow his church membership, do you think that when you go to his church or listen to his messages, what you'll hear is "hate your neighbor, kill one another, sin as much as you want, don't forgive, and other bad admonitions? Of course not. If he does that, nobody will come to his church. So the devil allows him to preach nice messages to attract people to his church. So he'll preach messages of love, peace, prosperity, and even use the name of Jesus; some would even tell their members to do what is right, but the devil allows this because they're EMPTY WORDS. They're powerless and lack transformative power. So people will listen to them and hear such but never change positively. In such a church, you'll find people fighting each other, living in sin, divorcing, fornicating in the choir, and doing all sorts of evil which brings glory to the devil.

Now, this is the same thing that happens when people like Lucky Dube, Bob Marley sing 'nice' songs. People listen to it but it produces no positive change in them because it lacks the power of positive transformation since it is not inspired by God. Someone can listen to such song that seemingly promotes brotherly love and go the next minute to kill his brother. So the devil takes glory in such and would allow his servants and followers to sing such songs because it won't produce any positive change in those who listen to it. And many unobservant Christians would be drawn to such music because they think it's saying nice and good things, but slowly and unconsciously, these Christians would fall in love with these powerless and empty songs and listen to them more often than they should listen to godly gospel songs.

Only godly gospel songs that are inspired by God carries the power to transform the lives of men positively. Have you heard anyone testify that after listening to a song by Lucky Dube or Bob Marley or any of these seemingly good songs they gave their life to Christ or they stopped living in sin and began living right, or they began to walk in true love with all men? No. Many people would even be playing these songs while drinking and smoking or planning a revenge. But we've heard so many testimonies of those who listened to a good gospel music and their lives are transformed.

Lastly, that Christian friend of mine asked me that question because he felt uneasy in his spirit about the song after sharing it on his WhatsApp status. So in order to get rid of the uneasy feeling, he decided to verify whether what he had done is right or wrong, which shows the presence of the Holy Spirit in his life and a deep desire to please God. Each time you are about to do something or have done something and you are feeling uneasy, it is usually an indication that you've done something wrong or about to do something wrong. So always watch out for this check in your spirit and don't ignore it.