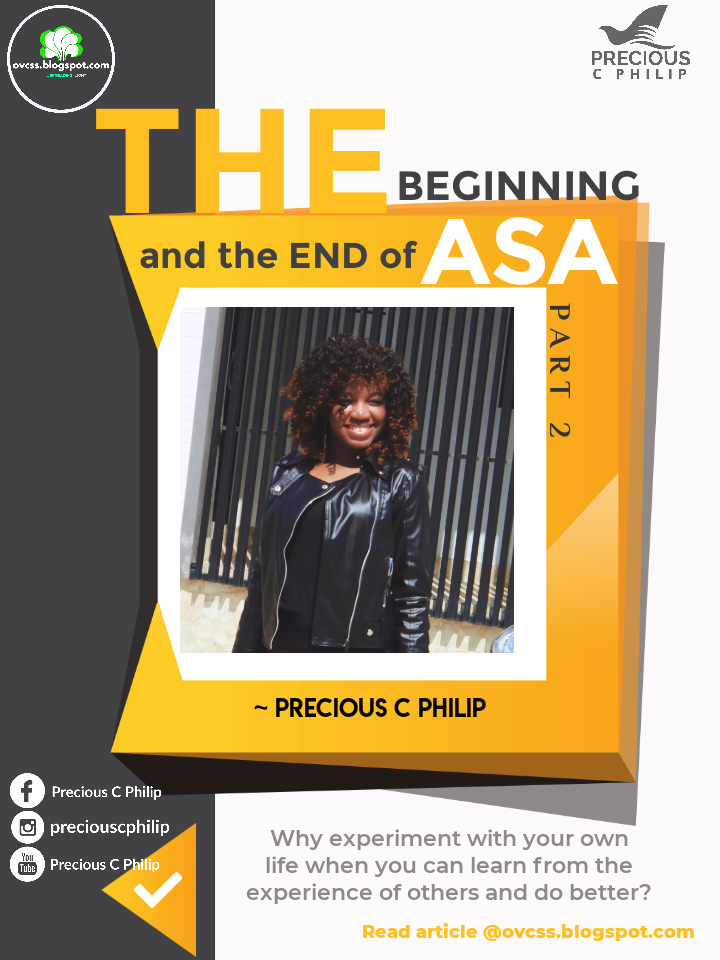 Last week, we looked at the interesting beginning of King Asa and learnt some valuables lessons we can apply to our lives to live wisely. If you missed out on that, click on the link below to read it👇

It is important you first read the part 1 to know how King Asa started, this will enable you to appreciate the lessons shared in today's article. So, you can pause and first finish reading the part 1 and then come back to read the part 2 that tells of the pathetic end of King Asa.

Now, let's look at the end of Asa

"In the thirty-sixth year of Asa’s reign, King Baasha of Israel invaded Judah and fortified Ramah in order to prevent anyone from entering or leaving King Asa’s territory in Judah. Asa responded by removing the silver and gold from the treasuries of the Temple of the Lord and the royal palace. He sent it to King Ben-hadad of Aram, who was ruling in Damascus, along with this message: “Let there be a treaty[a] between you and me like the one between your father and my father. See, I am sending you silver and gold. Break your treaty with King Baasha of Israel so that he will leave me alone.”

Ben-hadad agreed to King Asa’s request and sent the commanders of his army to attack the towns of Israel. They conquered the towns of Ijon, Dan, Abel-beth-maacah, and all the store cities in Naphtali. As soon as Baasha of Israel heard what was happening, he abandoned his project of fortifying Ramah and stopped all work on it. Then King Asa called out all the men of Judah to carry away the building stones and timbers that Baasha had been using to fortify Ramah. Asa used these materials to fortify the towns of Geba and Mizpah.

At that time Hanani the seer came to King Asa and told him, “Because you have put your trust in the king of Aram instead of in the Lord your God, you missed your chance to destroy the army of the king of Aram. Don’t you remember what happened to the Ethiopians and Libyans and their vast army, with all of their chariots and charioteers? At that time you relied on the Lord, and he handed them over to you. The eyes of the Lord search the whole earth in order to strengthen those whose hearts are fully committed to him. What a fool you have been! From now on you will be at war.” Asa became so angry with Hanani for saying this that he threw him into prison and put him in stocks. At that time Asa also began to oppress some of his people.

The rest of the events of Asa’s reign, from beginning to end, are recorded in The Book of the Kings of Judah and Israel. In the thirty-ninth year of his reign, Asa developed a serious foot disease. Yet even with the severity of his disease, he did not seek the Lord’s help but turned only to his physicians. So he died in the forty-first year of his reign. He was buried in the tomb he had carved out for himself in the City of David. He was laid on a bed perfumed with sweet spices and fragrant ointments, and the people built a huge funeral fire in his honor." 2 Chronicles 16:1-14

Lessons from the Last Years of Asa

Lesson 1: When King Asa was attacked by the King of Israel, instead of Him to run back to the same God who fought for him when the Ethiopians and Libyans invaded his territory and gave him mighty victory, he ran to man for help. He took the gold and silver treasuries in the temple of God and gave to a King (he considered more helpful than God) to help him. Often, we are tempted to use our own intelligence or wisdom or smartness to solve problems that confront us. We want to solve it our way and not God's way. We're tempted like King Asa was tempted, to falsify our reports in the office to steal some money from the company and pay the house rent that is due or to pay the children's school fees that is over due. We think we're acting smart to default in paying our tithes and offerings to offset a loan, to pay house rent, or to purchase something we desperately want to have. We believe we're being wise by visiting a witch doctor or a false prophet to conceive, to marry, to become rich. When we give in to these temptations, things might go the way we want it to go- we might see the change we want like King Asa successfully got the King of Israel off his back using the help of King Ben-hadad, but before long, we'll realise that we acted foolishly; and yes, things went the way we wanted it to go, but it was actually to our great disadvantage. Therefore, we must learn to follow due process; to follow the right procedure and not try to be smarter than God or to act self-sufficient. Rely on God to solve the problems of life.

Lesson 2: Running to man for help instead of running to God for help is a disrespect to God. When a challenge or a problem bigger than us arises, our first line of action should not be to look for someone that will help us, rather, it should be to seek the face of God and the help of God. It is the help of God that provokes the help of man. Let God be your first point of call, not any mortal (your friend, parents, siblings, mentor, pastor, spouse...) This is because God comes first, and there is no challenge bigger than God. The Bible even states clearly "This is what the Lord says: “Cursed are those who put their trust in mere humans, who rely on human strength and turn their hearts away from the Lord. They are like stunted shrubs in the desert, with no hope for the future. They will live in the barren wilderness, in an uninhabited salty land." Jeremiah 17:5-6

Lesson 3: Let your confidence be in God. Rely on God. Depend totally on God. God does not help those who depend on man. If you need the help of God, you must depend on Him. Those who rely on God always have victory over life's challenges, but those who rely on man end up defeated. It seemed as though King Asa was victorious relying on the help of man, but in the end, we saw the trouble he brought upon himself taking that line of action.

Lesson 5: The moment we stop relying on God, we stop depending on God, and we stop seeking help from God, He stops fighting our battles for us and we start fighting unnecessary battles. We stop enjoying His peace, rest and intervention. We leave His place of rest and enter a war zone where we'll continously fight without experiencing victory but defeat, pain and sorrow everytime. This was the judgement Hanani declared on King Asa in verse 9b.

Lesson 6: Unlike King Asa, we should respond to divine rebuke with a contrite and a repentant heart. When we err and the Lord brings a word of rebuke to us from anyone close to us, in order to rescue us from total destruction, we should accept His correction and rebuke and cry out for mercy. Mercy will always prevail over judgement. If King Asa had humbled himself before God and cried out for mercy upon hearing the judgement of God, God would have had mercy on Him. But he closed his heart and rebuffed the rebuke of the lord's anointed, hence further inflamed the anger of God upon him.

Lesson 7: Three years after King Asa abandoned God, he got afflicted with a terrible foot disease that led to his death. When he was loyal to God, God made sure He enjoyed good health. But the moment he left God, he lost access to good health. When we abandon God, we become accessible to the devil. We become open to all forms of attack and satanic afflictions. Things may still look okay three years after abandoning your relationship with God, but it won't be long before sickness, disease and problems come to live with you. Never abandon God. Guard your relationship with God with your life.

Lesson 8: God gave King Asa 2 years grace to repent and return to Him, so He can heal him and restore Him. But King Asa treated the grace and mercy of God with contempt. Verse 12b says that even with the severity of his disease, he did not seek the Lord’s help but turned only to his physicians. Very terrible! So he eventually died.

We must not seek help where there is no help. We must never put science and medicine above God or rely completely on doctors for healing. Certain cases are beyond the intervention of medicine and doctors. If you're reading this and you can see your life through the life of King Asa, don't wait for death to come - don't be stubborn like He was. Don't be proud, arrogant and unrepentant to your own destruction. Humble yourself today and return to your Maker with a contrite heart, crying for His mercy, and He'll welcome you back into His loving arms and give you a new beginning. It's a new year, return to God and start afresh.