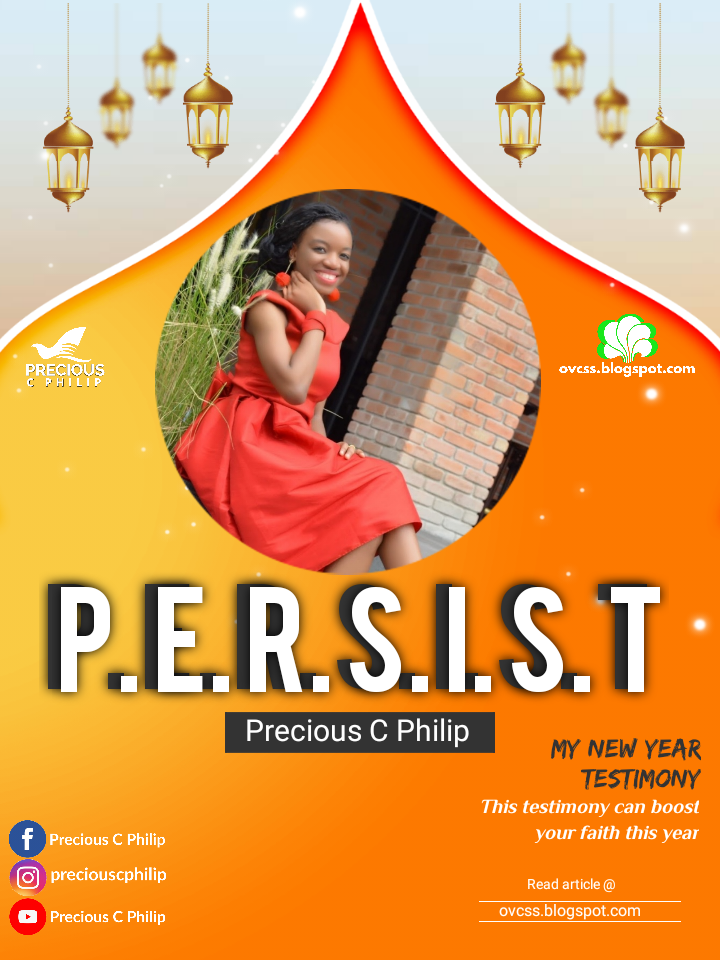 I believe as a Christian, you've been once encouraged to persist in prayers until your request is granted; please receive and accept that word of encouragement and PERSIST.

Since the month of October last year, there had been a major request I kept bringing to God. It was a thing only God could do. No man could solve the problem, except Him. It was beyond the help of man, friends, and relatives. So I kept talking to God about it.
We entered the new year and I decided to include the request in my "Expectation Form for 2021" and joined the 21 days prayer and fasting programme currently ongoing in my local assembly. Every day, I would sing, dance, praise, speak in tongues, worship, declare the word, confess the promises of God to me this year, pray fervently, and remind God of this major request.
I told Him that before the end of the 21 days fasting and prayers, I would love to have my request granted. On January 10, I read the Open Heavens Devotional titled "Persistent Prayers". The Bible reading for that day really encouraged me to be persistent in my request. It was the parable of the persistent widow:
"Then Jesus told his disciples a parable to show them that they should always pray and not give up. 2 He said: “In a certain town there was a judge who neither feared God nor cared what people thought. 3 And there was a widow in that town who kept coming to him with the plea, ‘Grant me justice against my adversary.’ 4 “For some time he refused. But finally he said to himself, ‘Even though I don’t fear God or care what people think, 5 yet because this widow keeps bothering me, I will see that she gets justice, so that she won’t eventually come and attack me!’”
6 And the Lord said, “Listen to what the unjust judge says. 7 And will not God bring about justice for his chosen ones, who cry out to him day and night? Will he keep putting them off? 8 I tell you, he will see that they get justice, and quickly. However, when the Son of Man comes, will he find faith on the earth?”
Verse 7 and 8 really hit me hard, and I prayed passionately that day, reminding God what He has said. Then on January 12 (2 days after the prayers), at 10:31pm, I received a good news: God has done it!!! I screamed and began giving God thanks. Indeed, if you persist, you'll get what you ask for. If you would pray persistently, soon you shall have your request met in Jesus' Name.
Circumstances might try to discourage you from persisting, but PERSIST! The look of things might attempt to discourage you from persisting, but PERSIST! The reports of people, the report of doctors, the words of friends might try to dissaude you from persisting, but PERSIST! If you persist in the place of prayers and don't give up, you'll get what you ask for and your joy will be full.
I remember Pastor Adeboye saying in that January 10 Devotional that God answers all prayers. When I read it, my eyes immediately popped open, because it sounded like 'God answers all prayers regardless of the motive, the spiritual state of the person asking, and what the person is asking for', but as I continued to read, I got the message He conveyed: When you persistently ask God for something, He'll give it to you. So when you ask, continue to ask, don't stop asking until you get what you are asking for, and you'll realise that God answers all prayers from His children.

Don't pray once and stop. Pray continously until your prayer is answered.

If you prayed and He didn't respond and you're His child, you probably stopped asking. Keep asking (it may take minutes, hours, days, months, or years) for God to answer, but He'll surely answer if you don't give up. Let Luke 18:7-8 encourage you to ask without giving up until you receive what you're asking for from God.
There is indeed GREAT POWER in persistency. This was what Delilah used to get her request granted by Samson. "And it came to pass, when she pressed him daily with her words, and urged him, so that his soul was vexed unto death; That he told her all his heart, and said unto her, There hath not come a razor upon mine head; for I have been a Nazarite unto God from my mother's womb: if I be shaven, then my strength will go from me, and I shall become weak, and be like any other man." Judges 16: 4-20
According to Pastor Adeboye, "you may wonder why God can't just answer you after praying once or twice. Well, He is sovereign. He will choose when to answer you. Also, some requests do not yield result with 'two-minute' prayers. You have to press in the spirit to be able to shift such things in the physical. Some other times, God may be using that situation to build your faith (1 Peter 1:7). Whatever the case, don't get weary when you don't receive answers immediately; keep praying."
Shalom.