The Christian Worker vs The Sex Worker ~ Precious C Philip 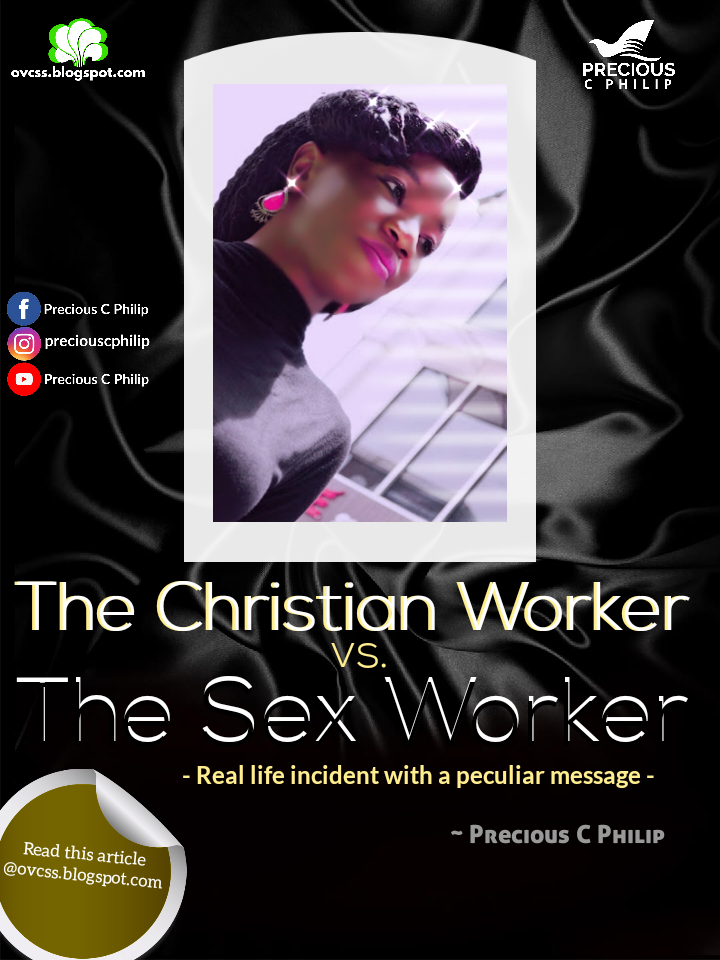 It is very sad that despite the multitude of messages and words of wisdom out there on the internet speaking against indecent dressing, many Christian women continue to dress half-naked. They completely reject the godly counsels and hold on to their indecent dressing. Some have even taken it a step further - from thigh split dresses to naked dresses. It is saddening to see Christian women competing with prostitutes on who can better expose their bodies.

Many Christian tailors and clothiers are not even helping matters. They sew all manner of skimpy clothes to attract, please, and retain their customers - all for the love of money. No wonder the bible says that the love of money is the root of all evil.

Few days ago, I accidentally viewed the Facebook story of a young "Christian woman", whom I've seen several times post programmes of her church on Instagram and share some God-related messages on her Facebook page, wearing a skimpy top that exposed her cleavage and the lower part of her belly, with a thigh split short skirt that largely exposed her left thigh. She wore this to a bridal shower of her friend. I was shocked. At first I thought it was a different person until I looked closer. I was startled seeing her confidently pose to take pictures and videos in this inappropriate wear. I however noticed that her female friends with her were also scantly dressed (the friends you keep honestly influence what you do).

I wondered, is this not the lady that often shares God-related posts on her instagram and Facebook page? I could not believe my eyes. So she is not yet saved? She is simply a religious Christian? (the questions I asked myself). But I had always had a check in my spirit whenever I read some of her posts because of a few other things I noticed about her, but the pictures of her I viewed that day on her Facebook status really confirmed my doubts about her salvation. I felt really bad.

This tells us that not many who share God-related posts on their social media are actually saved. Many are simply religious Christians. This is why as a born again Christian man, you should never decide to marry a woman just because she posts Christian stuff on her social media; take a closer look at her lifestyle.

Someone said: "Do not dress in a way that will make people stare at you strangely or be shocked and wonder who you really are (a prostitute or a Christian), but dress in a way that when people look at you, they won't be confused about your identity, but will know immediately what you stand for. Do not confuse people with your dressing.

I do wonder why some Christian women want to dress like the very sex workers they're supposed to reach after with the gospel of Jesus.

You then should not be dressed in the attire of a prostitute as a Christian woman.

Think about this: a female sex worker does not attempt to dress like a Christian woman when going for her 'work'. She dresses as sexy as possible in order to attract as much customers as she needs, to obtain the reward she needs (money). In the same way, a Christian female worker dresses as godly and decent as possible when going out to work (soul winning and preaching of the Gospel of Christ -which is a daily business) in order to attract as many customers (souls) as she can and bring them to Jesus to obtain her reward from God.

Please repent, dear sister, and stop dressing half-naked if you're guilty of this sin. Yes, God looks at the heart, but your dressing is equally important. You can't preach to prostitutes and win them to Christ with half-naked dressing. Can you? Be decent and godly in your appearance if you're serious about winning sinners to Christ.

If what you wear doesn't really matter as some would say, there wouldn't have been a need for every profession in the world to have their own dress code or attire. All would have the same attire. Don't be deceived!

You are from a royal family. You are a child of a King, who is the King of kings. Dressing half-naked is highly disrespectful to Him the same way it would be to an earthly king. Start henceforth to dress like a godly Christian woman, a child of the King of kings, a Princess of the Most High God. Be conscious of your royalty and make your heavenly Father proud. Please Him. Honor Him with your dressing. Usher lost souls into His kingdom with godly dressing instead of ushering them to the kingdom of Satan with ungodly dressing for the destruction of their souls.

If however you're reading this and you know you have sincerely not surrendered your life to Jesus yet, which is why you see nothing bad in dressing half-naked or sexy, please repent and surrender your life to Jesus today and He'll open your eyes to see the destructive and harmful nature of half-naked dressing and its underlying retribution. Jesus loves you.