Do You Respect Him? [A question with a true life story] ~ Precious C Philip 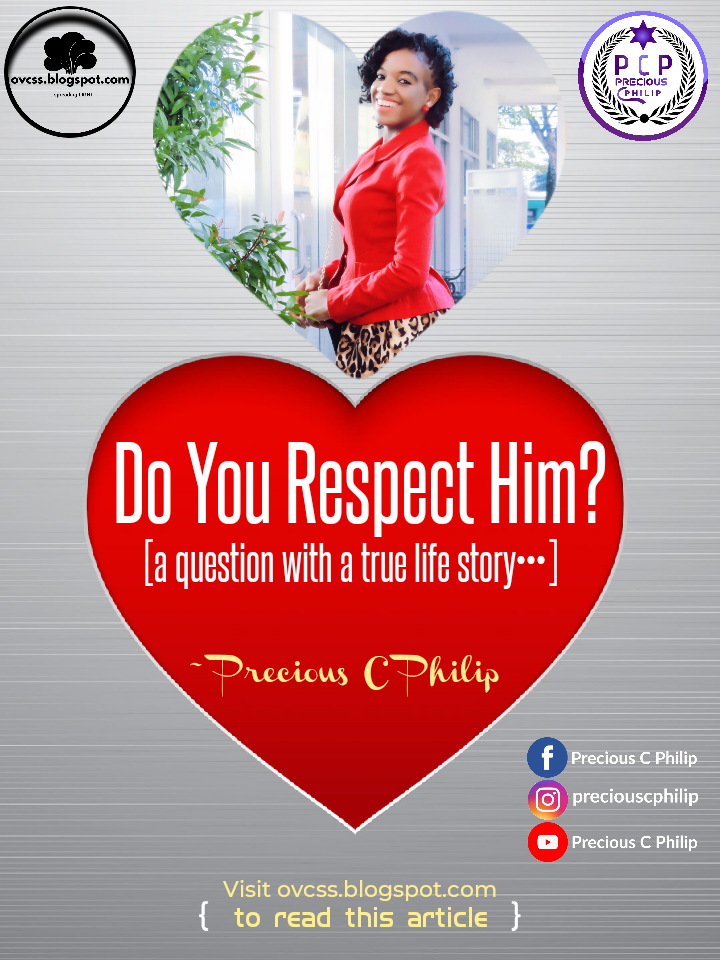 More often than not, many children of God take God for granted. That is, they fail to properly appreciate God, especially as a result of overfamiliarity. They underrate God and make light of who He is. But this is very dangerous. I mean, it can cost a life. Read this true life story below:

"David consulted with all his officials, including the generals and captains of his army.Then he addressed the entire assembly of Israel as follows: “If you approve and if it is the will of the Lord our God, let us send messages to all the Israelites throughout the land, including the priests and Levites in their towns and pasturelands. Let us invite them to come and join us. It is time to bring back the Ark of our God, for we neglected it during the reign of Saul.”

The whole assembly agreed to this, for the people could see it was the right thing to do. So David summoned all Israel, from the Shihor Brook of Egypt in the south all the way to the town of Lebo-hamath in the north, to join in bringing the Ark of God from Kiriath-jearim. Then David and all Israel went to Baalah of Judah (also called Kiriath-jearim) to bring back the Ark of God, which bears the name[b] of the Lord who is enthroned between the cherubim. They placed the Ark of God on a new cart and brought it from Abinadab’s house. Uzzah and Ahio were guiding the cart. David and all Israel were celebrating before God with all their might, singing songs and playing all kinds of musical instruments—lyres, harps, tambourines, cymbals, and trumpets.

But when they arrived at the threshing floor of Nacon, the oxen stumbled, and Uzzah reached out his hand to steady the Ark. Then the Lord’s anger was aroused against Uzzah, and he struck him dead because he had laid his hand on the Ark. So Uzzah died there in the presence of God.

David was now afraid of God, and he asked, “How can I ever bring the Ark of God back into my care?” So David did not move the Ark into the City of David. Instead, he took it to the house of Obed-edom of Gath. The Ark of God remained there in Obed-edom’s house for three months, and the Lord blessed the household of Obed-edom and everything he owned." 1 Chronicles 13:1-14 (NLT VERSION)

The tragic incident narrated in the story above instilled great fear into David - the fear of God. Before this tragic incident, it would be safe to say that David somewhat took God for granted by thinking it is okay to have two of his men guard the Ark and oversee its carriage to Jerusalem instead of him to first find out the requirements to follow in conveying the Ark of God from one place to another (1 Chronicles 15:11-13). His taking God for granted cost him the life of one of his men.

The Ark of God in the old testament bears His Name on it (1 Chronicles 13:6), and one significant thing we know about the Name of God is that it is holy (1 Chronicles 16:10). Moreover, the Name of God represents God Himself because the Name of God is God Himself. This is what made the Ark untouchable. No ordinary Israelite was allowed by God to near the Ark or even touch it because they're unholy and unworthy to do so (which was what Uzzah did even though he had tried to do what was seemingly right, but God struck him dead immediately. Only consecrated Priests and Levites were permitted by God to near the Ark (See 1 Chronicles 15:2-3).

It was after the incident that David sought counsel, followed the right procedure and successfully carried the Ark of God to the City of David in the prescribed way (Read 1 Chronicles 15:).

Today, many Christians take God for granted by walking into a church service late without shame and remorse. Some chit-chat with their friends or browse social media while worship, prayers, and sermon is in session. Others receive calls and reply messages while they're supposedly praying, reading the Bible, meditating on the scriptures, worshipping or having a quiet time with God.

We show high respect to our boss and senior colleagues at work. We don't use our phones or receive and make calls when we're in a meeting with them, but once we enter the church of God, come together for fellowship, or come before the presence of God, we lose every sense of respect and do whatever we like in the presence of God. This is very bad.

God asks: "A son naturally honors his father and a slave respects his master. If I am your father, where is my honor? If I am your master, where is my respect? The LORD who rules over all asks you this, you priests (Christians) who make light of my name! But you reply, 'How have we made light of your name'?"

Have respect for God and show reverence for Him and His Holy Name from now onwards. Fear God! "Let us hear the conclusion of the whole matter: Fear God, and keep his commandments: for this is the whole duty of man." Ecclesiastes 12:13