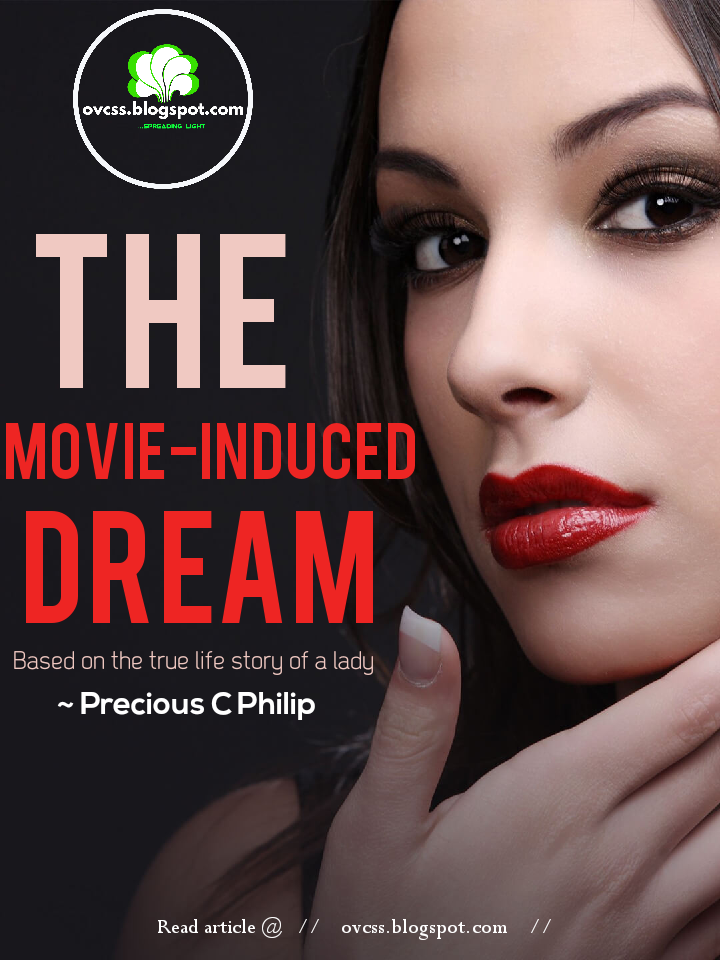 A young Christian woman slept one night after seeing a particular movie and had a dream. In the dream, she saw herself wearing the identity of an undercover agent. She was shooting sporadically, killing and injuring people, disorganizing things, climbing high buildings, in a bid to escape from a group of people in black coats seeking to capture her.

She suddenly awoke when the drama in the dream was intense; waking up from sleep with force, she sat down on her bed and wondered, "What kind of a dream is this, what could have triggered this kind of dream?" she asked herself. Suddenly, she remembered she had seen an American Action movie titled 'Agent 47' on TV before she slept, and in the movie, the lead actor was an undercover agent. She was dazed, because she had never had such fearful dream in many years, and she happen to start watching American action movies of recent due to the fact that it is being broadcasted for free on her TV. Before the incident, she had been watching Christian movies and never had she had such terrible dream.

What can we learn from this amazing story? The dreams we have at night or even during the day are mostly influenced or induced by what we feed our eyes. This lady watched an action movie right before she slept and she had that terrible dream. Do you know that if she had watched a demonic movie or a horror movie, she probably would have been oppressed by a demon or chased by a demon in her dream? Or, if she had seen a romance movie with explicit sexual content, she would likely have been defiled in the dream by some demon or seen herself watching people having sex in her dream, resulting in her masturbating or waking up to see herself wet? That is the reality many people do not want to accept or believe when it is communicated to them.

If you're still in doubt and think that the only cause of sexual dreams is having a spiritual husband or a spiritual wife for instance, go for a deliverance to be delivered from a spirit spouse, and I assure that when you're back from the deliverance and you have been successfully delivered, watch a pornographic video, images or even sexually explicit movie before you sleep and watch if you'll not have a sexual dream that same night or few days after if you continue to feed your eyes, mind and heart with pornography and other sexual immoral stuffs; even engaging in wrong sex (pre-marital and extra-marital sex) can attract the demons who defile people in dreams. Moreover, you should take note that the physical consequences of sexual dreams on your life are not in any way pleasant, they are pernicious.

Now, to those who hold to the belief that what the victims of sexual dreams watch has no connection with the sexual dreams they have, I know you think pornography, sexually explicit movies, musical videos and TV shows or programmes that showcase sexual immoral activities is no big deal, but let me educate you. Yes, pronography, sexually explicit movies and the rest of them are produced by human beings as you believe, but demons are the source of the inspiration. Stay with me please. The Bible for instance is written by men, but the inspiration came from the Holy Spirit, and so we all believe that the real Author of the Bible is the Holy Spirit and not the men who wrote it. The men are just the instrument the Holy Spirit used to write and deliver His message to mankind because He is a Spirit and the world is a physical place, so He needed physical men to write the message meant for the consumption of the physical world.

This is what demons do too. Demons are spirits and cannot physically produce videos, music and movies they want the physical world to consume, so their only option to get this done is to inspire men who're not possessed by the Holy Spirit to assist them to produce what they want the world to feed their eyes, mind, heart and spirit with and thereby grant them access into their lives. The same way you feed your eyes, mind, spirit and heart with the Bible and receive life and freedom because that is what the Holy Spirit gives to men, is the same way you feed your eyes with pornography, sexually explicit movies, sexually immoral music videos & TV shows and receive oppression from demons and sexual assault in dreams because that is what demons have to offer to mankind. The Bible says the devil comes to steal, kill and destroy. Their mission is only possession, oppression and destruction, nothing more.

So, the one who inspires the production of a thing is actually the real owner of the work. The Holy Spirit is the real Author of the Bible. So also, pornography, sexually explicit movies, demonic movies, horror movies, and the rest of them that showcase and promote sexually immoral stuffs are actually produced by demons who gave the inspiration.

Therefore, you'll be wise to desist from these things if indeed you want to be free from sexual dreams, demonic oppression and nightmares. Practice this as a born again Christian who's a victim of sexual dreams or demonic oppression whilst asleep: discipline yourself not to watch pronography and other sexually immoral movies, TV shows and musical videos, and also demonic stuffs for at least a month, watch godly movies, gospel music, godly shows and programmes, listen to sermons instead, and see if there'll be no tangible difference. 😊

Watch what you watch before going to bed at night; it can make you dream and it can influence your dream, positively or negatively.