THE QUESTION IN THE HEARTS OF MANY: CAN A LOVING AND MERCIFUL GOD REALLY SEND PEOPLE TO HELL? by Precious C Philip 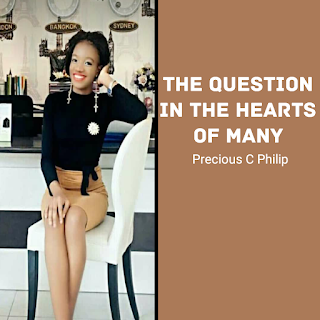 A lot of people think God is too loving and merciful that He cannot really cast sinners and millions of professing Christians practically living in sin and unrepentantly practicing unrighteousness into hell. They say God is not a wicked God and so He cannot do such. I mean, "How can such a loving God, who is too merciful and forgiving really cast people into hell?" they ask! But unfortunately, they're mistaken. If you’re one of such people with this mistaken belief, I want you to carefully and slowly read this eye-opening scripture below:

"God didn’t spare angels who sinned. He threw them into hell, where he has secured them with chains of darkness and is holding them for judgment. God didn’t spare the ancient world either. He brought the flood on the world of ungodly people, but he protected Noah and seven other people. Noah was his messenger who told people about the kind of life that has God’s approval. God condemned the cities of Sodom and Gomorrah and destroyed them by burning them to ashes. He made those cities an example to ungodly people of what is going to happen to them. Yet, God rescued Lot, a man who had his approval. Lot was distressed by the lifestyle of people who had no principles and lived in sexual freedom. Although he was a man who had God’s approval, he lived among the people of Sodom and Gomorrah. Each day was like torture to him as he saw and heard the immoral things that people did. Since the Lord did all this, he knows how to rescue godly people when they are tested. He also knows how to hold immoral people for punishment on the Day of Judgment. This is especially true of those who follow their corrupt nature along the path of impure desires and who despise the Lord’s authority." 2 Peter 2:4-10.

God is the same yesterday, today and forever. The scripture above shows us how God destroyed millions of people in the past who were living in sin and refused to live righteously. 2nd Peter 2:4-10 shows us what God is capable of doing. God is so committed to keeping His word that even if only eight people in the entire world lived according to His will on earth, the rest will be sent to hell.

Therefore, I want you to realize and believe this truth revealed in that scripture above: God is love, God is merciful, but God is also righteous and just. His righteous and just nature compels Him to do whatever He has said He'll do no matter the situation. He cannot compromise! He can't fail to keep His word because He possesses integrity and righteousness. He must therefore do whatever He has said and written in His word that He'll do, otherwise, He'll no longer be a righteous God and a just Judge, and the devil will accuse Him of being unfair, unjust and unrighteous. God is therefore under an obligation to keep each one of His spoken and written word. He cannot violate any of His word.

God is merciful, God is loving, but God is righteous and just. God is just and keeps to His word. If He said sinners and Christians living in sin will be sent to hell, He'll do it; because He must keep to His word as One having integrity and righteousness. That is who God is! Don't joke with Him! He's not just loving and kind and merciful, He is also just, fair and righteous. He is a God of justice. The judgment you deserve is what He'll give you on the judgment day as a fair and just Judge. Now is the time of grace, mercy and forgiveness. Then it'll be the time of fair judgment. Always remember what happened to those living in sin in the time of Noah, and what happened to the angels who sinned against God, even Sodom and Gomorrah as that scripture revealed.

The warning signal is everywhere like in the days of Noah. Don't let it seem foolish to you like it was to those living in the days of Noah and they ended up crying "Had I known!"
God is still the same God. He does not change and He cannot change! Don't be deceived! Repent from sinful living and live holy now you still have the opportunity. God does not want you to go to hell. 2 Peter 3:9 captures the passionate desire God has for you to repent, accept Jesus, surrender all to Him, and live holy: "The Lord is not slow in keeping his promise, as some understand slowness. Instead he is patient with you, not wanting anyone to perish, but everyone to come to repentance.

Heaven moreover is holy, and Revelation 21:27 says "Nothing unclean (unholy), or anyone who does anything detestable, and no one who tells lies will ever enter it. Only those whose names are written in the lamb's Book of Life will enter it", which is why sinners and unrepentant Christians living unholy lives will not be allowed to enter Heaven. No wonder Hebrews 12:14 says "Work at living in peace with everyone, and work at living a holy life, for those who are not holy will not see the Lord."

Dear sinner, God loves you so much and He does not want you to perish; please repent and accept Jesus and totally surrender your life to Him.
Dear Christian living in sin, God's grace, mercy, and forgiveness is still available, repent today and totally surrender your life to the leading and control of the Holy Spirit to successfully live a holy life.