DO WHAT MAKES YOU HAPPY. REALLY? by Precious C Philip 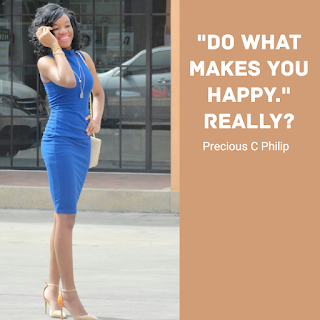 A good-looking young man by name Martin, in his twenties read on social media "Do what makes you happy" and fully embraced this piece of advice and made it his motto for living. He was in his 3rd year in the University. According to him, what made him happy was partying and sleeping around with different ladies in campus. He slept with all manner of ladies in campus and was nicknamed "chairman of women". He continued with this lifestyle since it was what made him happy till his final year in school. He however had a "permanent girlfriend" called Jane. Jane also shared the same ideology of "doing what makes you happy" with her boyfriend. In her own case, what made her happy was strictly partying; so she loathes reading and attending lectures and will always cheat during tests and examinations, but unfortunately for her, she always would end up with poor marks which made her GPA extremely low.

As the day for her final exam was approaching, she became very worried because without passing her final exam, she will not be allowed to graduate. A close friend of hers assured her that she will pass, and so she should not be perturbed because she'll take her somewhere. Later that day, her friend took her somewhere to meet a strange man who worked with demonic powers to manipulate things. She narrated her problem to the man and the man gave her a cream to apply on her body before having sex with an intelligent guy in the campus; and gave her a stern warning not to sleep with any other man except the intelligent guy for 7 days. That after 7 days, there will be a spiritual exchange - the guy's intelligence will be transferred to her and her dull-wittedness will be transferred to the guy. But she must come back to him to be purified of the charm before she can live normally again.

Jane did as the strange man instructed her and successfully slept with an intelligent guy in the campus; but on the 7th day, her steady boyfriend Martin called her on phone and asked her to come over to his place that he had a big surprise for her. On reaching his place, there was no surprise but an invitation to satisfy his sexual urge. She could not resist because she enjoyed sex with him, moreover, she forgot the warning given to her by the strange man, so they both had sexual intercourse. It was after the sexual fun that she remembered the warning. She quickly rushed out of the room in panic, to meet the strange man immediately. Unfortunately for her, breaking the stern instruction came with an irreversible consequence: a strong unpleasant body odor. She went back to her room hopeless and frustrated. The next day, she woke up and there was the awful body odor that not only polluted her fine body, but also polluted her entire room. Martin on the other hand also had his fair share of this irreversible foul body odor by reason of the sexual intercourse he had with Jane that 7th day. Shame, reproach and mockery from students in the campus flooded their lives.

Martin felt he was deceived by whoever wrote the statement he read on social media "Do what makes you happy". The campus ladies that were formerly warming his bed all abandoned him. When he passed by, the ladies that used to swim around him all covered their nose because of the horrendous smell oozing from his body. He was rejected by all his friends; so he decided he was going to end his life and went into a bush to commit suicide. But God being so gracious and merciful, sent someone to rescue him; before he could take a shot of the toxic drink he planned to drink and die, a man appeared from nowhere (he came to the bush to defecate) and rescued him and ministered Jesus to Him. He prayed for him and he surrendered his life to Jesus and was healed at the spot by the Mighty power of Jesus. The next day, he went to see Jane to tell her about Jesus who healed him and gave him a new life, but on getting to Jane's room, there was her body lying lifeless on the floor: she had committed suicide. Martin lives today to tell this tragic story.

Dear sisters and brothers in Christ, the Bible does not advise us to do what makes us happy. The Bible advice that we do what is right. The advice to do whatever makes you happy is from the devil because doing just anything that makes you happy often would get you into trouble or ruin your life, if not now, later in the future, but doing what is right protects your life against destruction and harm. As a child of God, you really don't live to do what makes you happy, because happiness is not what God promised you; what God promised you is joy. So as a child of God you're supposed to actually do what brings joy to your soul and spirit, and if you're walking with God and following the leading of the Holy Spirit, what brings you joy will always be what is right. Whatever is wrong can never bring joy to your soul, it would rather irritate you.

Moreover, you must realize that you are a spirit, you live in a body, and you have a soul. Now your body which houses the flesh, would be happy when you're drinking alcohol, having premarital sex, sleeping with someone else’s spouse, clubbing, partying, overeating, watching pornography, masturbating, engaging in sext, watching sexually provocative movies and music videos, seeing nude pictures, smoking..., although these things makes the flesh and your body happy, it does not bring joy to your soul and spirit. This is why those who do these things still battle with depression, sadness and sorrow when they're alone doing none of these. Because true satisfaction and fulfillment in life comes when your soul and spirit is joyful, because your soul is your real self, not your body.

So the goal is to do what brings joy to your soul and spirit, not what makes your body and the flesh happy. It is to do what brings joy to God. It is to do what makes God joyful, not what makes you happy. The world does what makes them happy, but as a child of God, you don't follow suit; rather, you do what brings joy to your soul and spirit. Having sex before marriage, partying, going to night clubs, drinking alcohol, makes those who belong to the world happy, but if you're a true child of God, engaging in these things will not bring joy to your soul, but rather bring sorrow at the end. If you're sincere to yourself and your conscience is still alive, you'll notice that after doing these things as a Christian, when you're alone, you begin to feel the absence of joy in your soul, your conscience pricks you, and you begin to regret your acts. You lack joy within. You lack peace and are restless. Because your flesh was entertained and made happy, but your spirit was grieved and your soul was fed things that never edified him.

Don't live to serve the flesh and fulfill the desires of your body, which is mortal. Your body is your earth suit which you'll drop in the grave and depart to your eternal home. Live to fulfill the desires of your spirit and your immortal soul which has been transformed by God's word and is subject to the leading of the Holy Spirit. Doing what brings joy to God would automatically bring joy to your soul and spirit if you're indeed a child of God.

“For if you live controlled by the flesh, you will die spiritually; but if by the Spirit you put to death the misdeeds of the body, you will live.” Romans 8:13