THE GOOD THING ABOUT SEX BEFORE MARRIAGE 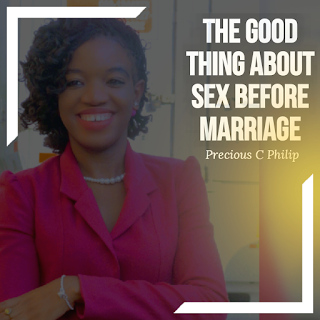 There is this story of a 25 year-old lady who got into a sexual relationship with a youthful handsome man while in university. The man made so many sweet promises to her, including the promise of a world-class marriage immediately after their university education, because he is from a very rich family and already has a family multinational business to inherit right after his university studies. They were “campus couple” as they lived together off campus, and everyone in the campus knew about their relationship. These “lovebirds” were envied by many campus girls and boys. However, the lady got pregnant thrice for this man, and upon his request, aborted the three pregnancies respectively. But on the third abortion, there were complications and her womb got ruptured and was removed. It was a gruesome experience for her, but this man assured her that there was no need for her to worry, because he would still marry her even without a womb for he loved her and nothing could stop him from marrying her; besides, marriage is first about companionship, they could adopt as many children as they wanted later. This young lady found hope and rest in this comforting promise given to her by her boyfriend and continued with her life. But little did she know that he had a different plan. Right after their university education, this young man relocated to another city and got married to a "complete" lady and moved on with his life. When she heard this heartbreaking news from a friend of hers with pictures from social media as proof, she could not bear it; she went to a secluded place and committed suicide. What a tragic story! Do you realize that the genesis of this lady's premature death is premarital sex? She killed herself because she felt no man could marry her without a womb. How did she lose her womb? Through abortion triggered by unwanted pregnancy and birthed by premarital sex. Do you know this lady could have managed to move on with her life if she still had a womb, if she never had sexual relations with this man, and if she never committed the abortions she did? Hmm!

Another story was told of a young man in his early thirties desiring to marry. So in a quest to find "Mrs. Right", instead of following the blueprint given by God on how to find "THE RIGHT PARTNER", he decided he was going to do the finding in his own way using his wisdom, knowledge, and intelligence. How did he go about it? He would date any lady he comes across that he perceives would be perfect for him as a wife, to find out if they're compatible. He dated many ladies, and in each relationship with these ladies, he would always enjoy "free sex" from them. Some he met raw, others he met with protection. One day he woke up feeling very sick, so he went to the hospital to find out what was wrong with him. After going through a series of tests, the doctor gave him the result of the tests which showed that he was HIV positive and he also had gonorrhea. Frustration and depression set in immediately as he heard a voice whisper into his ears that death is knocking at the door of his life. He went home frustrated. After a week, he died of hypertension and the severe case of depression. Hmm! It's a pity! What is the principal cause of his death? Premarital sex. If he never had premarital sex with those ladies in the name of finding "Mrs. Right", he would certainly have not died prematurely.

Premarital sex births premature death, suicide, heart breaks, unwanted pregnancies, abortion, loss of womb, early, unplanned or forced marriage, murder, sickness, STDs, even dropping out of school, and so much more. But with all these bad fruits, is there something good about sex before marriage? Yes! What is it? The good thing about sex before marriage is that THERE IS NO GOOD THING ABOUT SEX BEFORE MARRIAGE. Surprised? Well, if God says something is EVIL (BAD), you can't therefore find anything good in it, not even one. What God does is when we humble ourselves before Him, repent and seek Him, and give our mistakes, our past, and messed up life to Him, He produces something good out of it being our Creator. There is nothing He cannot do. There is no terrible story He cannot rewrite. There is no mistake He cannot correct. But the truth remains that there is nothing good in sex before marriage.

Do you know what you could have avoided if you never slept with that man? Have you ever thought of what you could have achieved and done if you never slept with those ladies? Do you know how prosperous, successful and peaceful your life would have been if you're not currently having premarital sex with that man or that lady? That previous sweet relationship of yours could have been preserved if premarital sex was not introduced. Premarital sex corrupts and ruins a good relationship. Sex before marriage has done more harm than good. Do away with it if you've been allowing it in your relationship as a Christian, and you'll behold the marvelous change you'll experience in your relationship and in your fellowship with God.

Addicted to fornication? There is a way out! To overcome the habit of engaging in premarital sex, visit ovcss.com today.