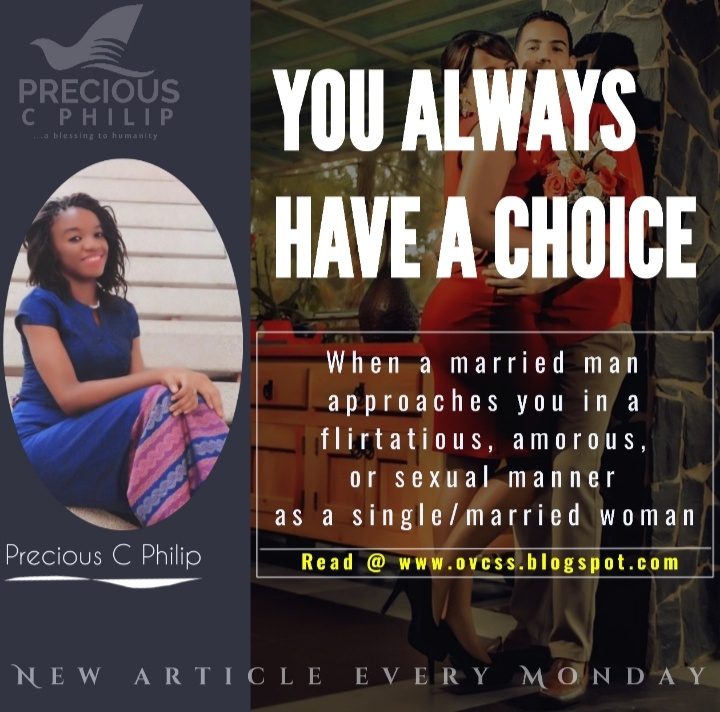 Lots of young single ladies today who date or sleep with married men try to rationalize their selfish actions by saying that they're not the ones who go after married men; it is the other way round - married men are the ones who pursue them.

But the question I ask is: when a group of mad men is pursuing you, what do you do as a sane woman? You would run. And, you wouldn't run to them, but would run from them. If you choose to run to them, onlookers will call you a mad person too (except you're running to them to deliver them from the spirit of insanity). So, when a married man is pursuing you, if you're sane, you will know that that man is temporarily "insane", otherwise he will not leave his wife and children to chase after another man's wife, yes!. [If you're married, you're already another man's wife; if you're still single, the man that will be your husband is already created by God, so you belong to someone].

If you decide to frolic with a married man and have fun with him, you also become temporarily "insane". You may not agree with this, but when you talk to ladies who're willing to share their terrible experiences with married men with you, they'll tell you that they don't know what came over them to have agreed to date a married man, in other words, they agree that they were not in their right senses when they were sleeping/dating a married man - they were "temporarily" insane and did "crazy" things.

You always have a choice either to run to married men or run from married men when they come after you. Sometimes you have to run from them, other times, God needs you to preach to them and win them back to Him and aid in the restoration of their marriage.

I recall traveling to Nigeria few years ago and a married rich man in Abuja made advances at me. I didn't even grant him audience when I sensed what he wanted from his flirtatious gestures that attempted to stupefy me. I was really surprised. I also felt my dressing must have given him the boldness to walk up to me because I was casually dressed that day, and it was the first time a married man made clear advances at me after I became born again and visited Nigeria.

You may not be able to stop married men from making advances at you, but you decide what happens when they make advances at you. However, I would add that if married men are the only ones you attract, there could be something you're not doing right, and, if married men are always making advances at you, the problem could be from your end. How do you dress? I know you don't want me to touch that, but check this out: "What did the man look like?” the king asked. “He was wearing a cloak made of animal skins, tied with a leather belt,” they answered. “It's Elijah!” the king exclaimed." 2 Kings 1:7-8

The King identified Elijah simply by his dressing. People can tell who you are by your dressing. The way you dress determines the kind of people you attract to yourself. Your dressing also tells people, men especially, if they can approach you in a flirtatious manner. Check your dressing style and the kind of clothes you wear.

If you're always dressing half-naked, I'm sorry but, you're the one inviting these licentious men to yourself.

You cannot be decently dressed in a godly manner and married men will be running after you always.

How do I know this? Most married men that go after young ladies or single ladies - hunt them for sex. So, if you're godly and dress godly, and live godly openly and privately, married men cannot always approach you because they can see that you're a godly person who will not indulge in sexual immorality. Only in few special cases do they approach godly ladies: when they know the lady is experiencing financial difficulty and they try to offer her substantial money/gifts in exchange for sexual pleasure or demand for sex in exchange for a job offer or promotion in the work place.

You should always think about this when a married man makes advances at you: "If my body is not extremely precious and valuable, why would he offer to give me any amount of money or material possessions just to have access to it?" This should tell you that your body is precious and that is why they want to have access to it at all cost. Do you know that a lot of girls have gone to their early grave because they refused to flee from these rich married men and Alhajis who had sex with them and used them for money rituals or offered them as a sacrifice to demons to achieve their political ambitions? Don't think such can't happen to you. It can happen to any lady who chooses to dance with the devil and disregard God. Don't rejoice or brag that married men are chasing after you. It is a sign usually that you're not doing something in the right way - openly or secretly; and this wrong thing you're doing is what attracts licentious married men to you. If your values are right and clear to the public, you'll attract men who share similar values with you. But when your values are not clear and you don't know what you're created to do, any man can approach you, and you equally will fall for any man just because they have money or material possessions or fame or political power.

When a married man approaches you as a Christian woman, married or single, you always have a choice: to either dance to their tune and be wounded severely, or to make them dance to your own godly tune and win them for Christ, save their marriage, preserve your body and soul from destruction, and make God proud.

"But you are not like that, for you are a chosen people. You are royal priests, a holy nation, God’s very own possession. As a result, you can show others the goodness of God, for he called you out of the darkness into his wonderful light." 1 Peter 2:9

It would be more terrible for you if you date a man who is married to a Christian woman that has a real relationship with God and knows how to pray. You'll be playing with fire like King Abimelech (Genesis 20). Save your soul now and end that destructive relationship with a married man and return him to his wife like King Abimelech returned Sarah to Abraham and he was spared. Flee sexual immorality like Joseph did henceforth and dedicate your life to Jesus and live holy. May God give you beautiful testimonies as you take this rewarding step right now in Jesus' Name.

Remember to check again next week Monday for another life-changing message from God to you. God bless you.