HYPOCRISY - The undoing of many Christians today – I 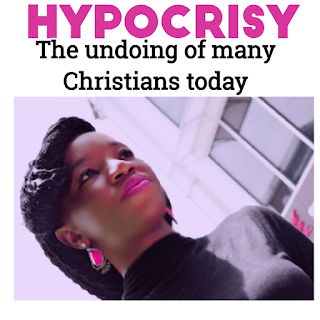 In general terms, hypocrisy is the habit of pretending to be what one is not. It is purporting as a lifestyle to have moral standards one does not have in reality. Whoever is practicing such a lifestyle is called a hypocrite. Biblical examples of hypocrites are the Scribes and Pharisees. Jesus Christ identified the Scribes and Pharisees as perfect examples of hypocrites in Matthew 23:27-28, Matthew 23:13, 15 & 23, and Matthew 15:1-9. Unfortunately today, hypocrisy has built a home in the Christendom; many professing Christians are neck-deep in hypocrisy. Some are quite cognizant of their hypocritical living, while others are not fully aware that they’re living in hypocrisy; but either way, hypocrisy is a dangerous sin causing the ruin and destruction of its victims. Jesus hates hypocrisy!

Let’s review some of the characteristics of hypocrites using the lifestyle of the Scribes and Pharisees, since Jesus identified them as perfect examples of hypocrites:

1. They live in pretense and dishonesty: Hypocrites pretend especially to be morally upright, but in reality, they are morally bankrupt. They look pious outward but inward, they are far from God. “They shamelessly cheat widows out of their property and then pretend to be pious by making long prayers in public. Because of this, they will be more severely punished.” Mark 12:40

2. Hypocrites are blind to their own faults but very perceptive of the faults of others. “You hypocrite! First take the log out of your own eye, and then you will be able to see clearly to take the speck out of your brother's eye.” Matthew 7:5

3. They do not know what is important to God and what His will is; they are more concerned with following the norm, observing customs and traditions of men than obeying the commands of God and doing the will of God. “You put aside God's command and obey human teachings.” And Jesus continued, “You have a clever way of rejecting God's law in order to uphold your own teaching.” Mark 7:8-9.
“But the Lord replied, “You hypocrites! Each of you works on the Sabbath day! Don’t you untie your ox or your donkey from its stall on the Sabbath and lead it out for water? This dear woman, a daughter of Abraham, has been held in bondage by Satan for eighteen years. Isn’t it right that she be released, even on the Sabbath?” Luke 13:15-16

4. They have no regard for the word of God and the commandments of God. “Anyone who belongs to God listens gladly to the words of God. But you don't listen because you don't belong to God." John 8:47

5. They lack knowledge of God’s true expectations of His children. “How terrible for you, teachers of the Law and Pharisees! You hypocrites! You give to God one tenth even of the seasoning herbs, such as mint, dill, and cumin, but you neglect to obey the really important teachings of the Law, such as justice and mercy and honesty. These you should practice, without neglecting the others.” Matthew 23:23.

6. They love to make public display of their religious standing and good works, e.g giving to the needy, fasting, praying, going to church, reading the Bible, speaking in tongues etc. “So when you give something to a needy person, do not make a big show of it, as the hypocrites do in the houses of worship and on the streets. They do it so that people will praise them. I assure you, they have already been paid in full.” Matthew 6:2.
“When you pray, don't be like hypocrites. They like to stand in synagogues and on street corners to pray so that everyone can see them. I can guarantee this truth: That will be their only reward.” Matthew 6: 5
“And when you fast, don't make it obvious, as the hypocrites do, for they try to look miserable and disheveled so people will admire them for their fasting. I tell you the truth, that is the only reward they will ever get.” Matthew 6:16

7. Hypocrites view themselves as the only good, righteous, pious and spiritual people around. Consequently, they are highly judgmental of other people’s mistakes and short comings in public, whereas they themselves are guilty of worse sins in secret. “…on the outside you appear good to everybody, but inside you are full of hypocrisy and sins.” Matthew 23:28

Other common traits found in hypocrites are pride, arrogance, self-importance, boastfulness, lies, deceit, unreceptiveness to corrections, and a feeling of being above mistakes.
A careful consideration of these characteristics may reveal one, two or more that may be evident in your life. I pray that God will destroy every root of hypocrisy in your life today in Jesus’ Name.