HOW I DO NOT BORROW MONEY ~ Precious C Philip 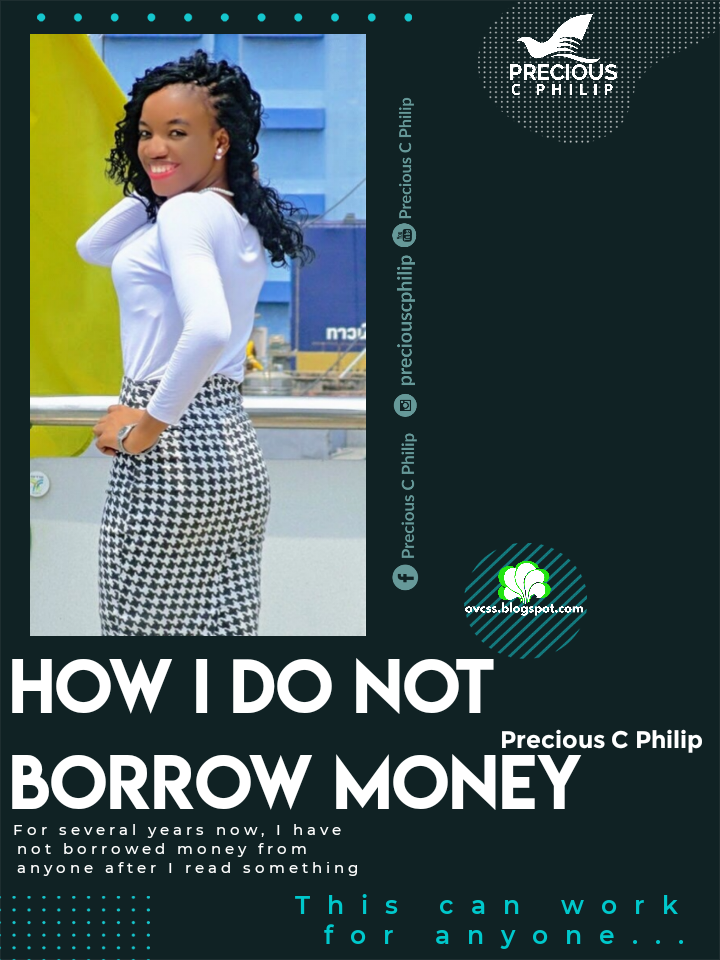 Other things I do that I believe helps me not to borrow are:

I tithe faithfully and correctly. I give precious monetary offerings to God. I make monetary investment in the Kingdom of God. I give to my parents. I lend money to people and help people financially when I'm led by the Holy Spirit to help them.
Planning and budgeting: I always plan how I'll spend my money before it arrives. And I budget how much should be spent on my monthly obligations, expenses, needs, and wants.
Discipline: I discipline myself to stick to my monthly budget no matter what happens. So if I budget 2,000 baht for instance on feeding for a month, I don't spend extra money on feeding. I carefully manage the food I have and ensure it lasts me for one month. If I overeat some days and finish the food I have at home before month end, I don't go shopping for food till next month (except when it is absolutely necessary). I live on snacks/fruits, and this reminds me not to overeat next month and finish my food before month end because I'll pay for it later.
I don't practice impulse buying. I'm not the kind of person who buys things randomly or on impulse. I don't see something beautiful while passing through a shop or taking a walk in the shopping mall and I buy it just because it is too beautiful to let go or it's a promotional offer or it's on huge discount. No! If it's not a need or on my monthly budget, I don't buy until it becomes a need or a part of my budget.
Take care of NEEDS and OBLIGATIONS first before WANTS. I spend money on my needs and obligations first, whatever is left I can then take out from it to buy my wants.
Lastly, I live within my means. I buy what I can afford per time considering my level. I don't buy what is trending when I can't afford it or it's not a need. I don't buy what is in vogue or what everyone is buying, wearing, owing, or flaunting. I buy what I can afford and what I need. I don't buy to impress people. I have a vision and a purpose to fulfil on earth - that is my major focus.
It is funny that a lot of Christians make investments in so many platforms and save money monthly yet they still live on borrowing. I'm not playing down on making investments and savings, it's good to save and to make legit investments, but I believe strongly in wise planning, wise spending and wise investments. If you practice monthly/daily saving but spend foolishly, make foolish investments and live above your means or beyond your resources, you'll remain a slave to borrowing.
I hope this article blessed you and you learnt something valuable.
God bless you and see you again next week with another educative article.
Shalom.